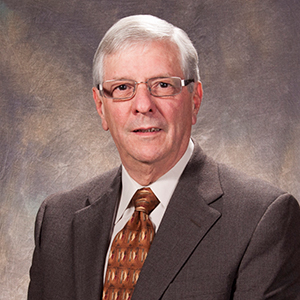 Kim Barclay Leonard grew up in Hyndman PA. One of Kim’s most cherished accomplishments while growing up in Hyndman was attaining the Eagle Scout award from the Boy Scouts of America. From 1962-1967 Kim earned both a Bachelor and Master’s degree from Penn State University. Upon graduation, Kim joined the U.S. Army and used his leadership skills as captain serving in Viet Nam. For his valor he was awarded a Bronze Star. Upon return from Service abroad, Kim worked at the Corporate Headquarters of Container Corporation of America in Chicago. In 1972, Kim and Marion moved to Cumberland and Kim joined his father at Aircon Engineering Inc. which is a distributor of heating and air-conditioning products in a four state area. Kim served as president and CEO for 30 years.

He served as president of the Cumberland Rotary Club, The Western Maryland Health System (WMHS), the Allegany County Chamber of Commerce, the Potomac Council Boy Scouts of America, the WMHS Foundation Board, and still continues his active participation in these organizations. Kim played a pivotal role in local health care, serving on the Board at Memorial Hospital and as chairperson helped forge the Western Maryland Health System and now serves on the UMPC Western Maryland board. While busy with the WMHS, he also became a trustee of Allegany college of Maryland and now chairs the Allegany College Board of Trustees. Kim also chaired the Greater Cumberland Committee pursuing regional economic growth and most recently been involved in the North South Highway project. In 1996 Aircon Engineering was recognized by the Chamber as The Business of the Year. Then in 2003 the Chamber recognized Kim as the “Individual of the Year.” In 2006, Kim was honored with the Henrietta Schwarzenbach Community Service award. In 2008 the Potomac Council Boy Scouts of America, recognized Kim’s dedication to the Scouts with the Silver Beaver Award representing the highest volunteer award in Scouting. In 2011 Kim and Marion Leonard were honored by the Allegany County Chamber for the Community Service Award. In 2016 Kim and Marion Leonard were honored by the Community Trust Foundation for the Humanitarian Leadership Award. At this time Kim continues to dedicate his time and energy to UMPC Western Maryland, Allegany College of Maryland, Cumberland Rotary Club, Allegany County Chamber of Commerce, The Greater Cumberland Committee and the Boy Scouts.