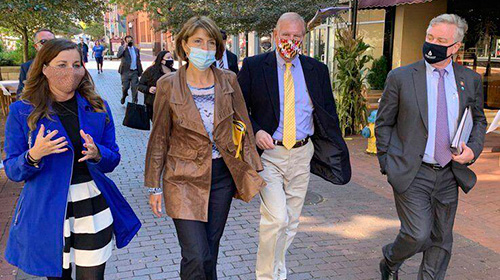 Representatives Trone and McMorris Rodgers discussed rural Broadband and connectivity issues with local business leaders and telecommunications experts during a bipartisan initiative in Cumberland on September 21.

CUMBERLAND — U.S. Rep. David Trone (D-Md.) was joined by U.S. Rep. Cathy McMorris Rodgers (R-Wash.) on Monday for a bipartisan tour of the 6th Congressional District, which included a stop in Cumberland.

The tour comes as part of the Bipartisan Policy Center’s American Congressional Exchange Program. Members of different parties spend time in the other’s Congressional district. In October 2019, Rep. Trone visited Rodgers’ district in eastern Washington state, where they met with local leaders and business owners to discuss how they can work together to pass bipartisan solutions in Congress.

The program focuses on advancing legislation on common ground issues such as broadband, addiction and mental health.

“Insufficient broadband has hurt the rural area in particular,” Trone said. “We need a large-scale infrastructure broadband bill. It’s the digital highway just like the electrification of the country and the construction of our highway system in the 1950s was. Connecting our communities is going to have to happen. I think the time is now to be working toward a bipartisan solution.”

Trone and Rodgers said connectivity is crucial for the delivery of health care, education and remote working.

Rodgers said she loses internet connectivity in eastern Washington state within 15 miles of leaving the city of Spokane.

“This is an issue that has only been underscored during COVID,” Rodgers said. “Both Republicans and Democrats across the country are saying we have to close the digital divide once and for all. This is our future ... kids are in virtual education.”

Rodgers said incorrect connectivity mapping drawn by communications companies has contributed to the problem. The Federal Communications Commission has been attempting to correctly identify areas that do not have adequate broadband connectivity.

“There has been a lot of investment but the mapping issue has been a big problem,” Rodgers said. “We decided in April to make sure our maps are accurate. We worked in a bipartisan way and got legislation on the president’s desk for him to sign in the spring. But it requires an update of the maps as it moves forward.

“And we have to figure out this last mile (connectivity problem). It will be very expensive. But the federal government has invested in a lot of fiber in areas all around this country that have not been active due to a failure to connect the final mile,” Rodgers said. “A lot of this goes to those underserved areas so we need to be smarter.”

Llewellyn said connectivity is a high priority now because people are moving away from urban areas to rural communities like Cumberland because they can work remotely. Providing reliable internet connectivity with the highest capacity is critical to support that trend, he said.

“When this project came together several years ago, one of the several themes that emerged from it was the fact the members of Congress do not get that much time and opportunity to spend with one another anymore especially if they are from across the aisle,” John R. Richter of the Bipartisan Policy Center, said. “They need time to spend together ... it’s not to say they will always get along, but spending time together can allow bonding and trust to begin. It is important to learn more about each other and their issues and concerns. One of the best ways is to learn where each other comes from. Once you get people outside of Washington and that crucible of nastiness and confrontation, they get a chance to talk and be themselves and that is important.”

Trone and Rodgers were joined by Cumberland Mayor Ray Morriss for a walking tour of the downtown mall following the meeting.